To OWEN...Welcome to Manchester United!! 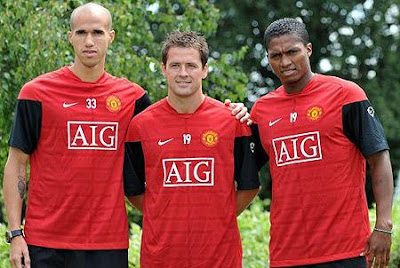 It was anticipated Ferguson would make further signings in addition to Owen, Antonio Valencia and Gabriel Obertan, who joined last week from Bordeaux.

But, faced with a market over-inflated by Real Madrid and Manchester City, Ferguson has decided his current squad is good enough to challenge for an unprecedented fourth consecutive league title, even though Cristiano Ronaldo and Carlos Tevez have left.

He said: "It is the end of our business, so all these stories about who were are supposed to be getting - forget it."

It means Owen will take over Ronaldo's shirt and his place in an attacking line-up containing Wayne Rooney and Dimitar Berbatov, plus youngsters Daniel Welbeck and Federico Macheda, who will both be given a chance to prove they are worthy of the accolades that have been bestowed on them.

Ferguson confirmed he made a bid for Karim Benzema, only to be rebuffed by the Lyon man, who instead became part of Real Madrid's extraordinary spending spree.
Hasil Coretan Unknown